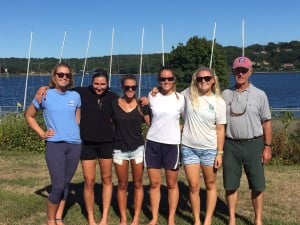 Rachel and Hannah were with the ladies at the Stu Nelson with Sarah and Marisa in B this time. The Rams were in the hunt throughout with Coast Guard taking an early lead which proved to be insurmountable. The Rams were 2nd or 3rd for most of the event with several teams challenging. Bowdoin got hot at the end and snuck by leaving the Rams in third. Slightly disappointing but still a podium finish. Rachel and Hannah ended 4th in A, losing a tie breaker to Yale. Sarah and Marisa were 6th in B. The Lady Rams are going to be contenders. Conditions were excellent both days. Saturday was south 6-10 and Sunday north 8-13. Just about perfect.

The coed squad at the Hatch Brown had a tough time. The Saturday conditions were light and very unstable, but tough for everyone. The Rams had little success in all three divisions and found themselves 17th in the 18 team field. Sunday was breezier, but extremely shifty. The results were no better. The team has struggled on the Charles recently and we need to get it figured out with the qualifiers for the Atlantic Coast Championships on the Charles at the end of October.Matt Coughlin, Peter Girard and Pat Isherwood had the tillers with Kate Nota, Elizabeth Durgin and Sarah Morin on the jib sheets.

Freshmen skippers Dakota Northrup and Brendan Read were at BC for a Central Series Invite in Z420s and FJs. Jack Hurley was in A with Dakota with Lauren Richards and Lauren Oliveira sharing the crewing with Brendan. Conditions were very shifty, especially on Sunday. The team finished a very solid 6th in the 17 team field.

The Donaghy Bowl at UConn was a Sunday only affair sailed in FJs with fat head mains that we had never seen before. The event was sailed off Avery Point in Groton, CT at the mouth of the Thames. Junior Matt Gibbs with freshman Max Griswold were in A and took a swim in the first race, but rallied for 2nd in their division. Freshman Sam Rush sailed B with sophomore Ellis Havelock and they were 2nd as well, for a 2nd place team finish behind Brown.