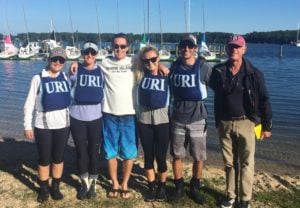 Happy Rams after a solid 5th in St. Mary’s

The Rams were VERY busy over the September 24-25 weekend with 6 events including 2 major inter-conference events, the St. Mary’s Fall and the Hood Trophy at Tufts. The St. Mary’s event was our top priority with Rachel and Hannah in A and Dakota and Kate in B with captain Matt Gibbs standing by. Rachel and Hannah were good, but not brilliant on Saturday. Dakota and Kate were again doing a solid job in B. After 9 races the Rams were 6th, 35 points behind BC in 3rd. Sunday was lighter which prevented the full round robin, but the Rams were steadily gaining on a podium position, closing to within 6 points of MIT and BC going into the final B race. The rest of the field was more than 50 points astern. A costly foul put the Rams far back on the 1st beat, but they rallied for a 10th and nearly got enough points on BC to move into 4th, falling 1 point short. It was a 5th for the Rams and the best Inter-conference finish since the Moody last year.

Brendan Read/Lauren Richards and Patrick Penwell/Sarah Morin represented the Rams at the Hood. The Mystic Lake continued to stymie the Rams and they finished 14th in the 19 team field, but did grab a pair of bullets in A. The Loder Trophy at MIT (run by UNH) and the Amanda Invite for Women at Roger Williams were beset with management problems. At the Loder Peter Girard/Ryan Geib were in A with Karel Mailloux-Kuz/Ian Nannig and Sam rush/Ellis Havelock sharing B. The on water results in A were good for 4th in Division, but an unresolved scoring error added 15 points to their score. The B squad had less success, leaving the Rams officially in 12th, but it should have been higher. Frustrating, but great experience. There were problems at the Amanda Invite, too, but everyone had to suffer through them. Sarah Hermus/Marisa Decollibus were in A with Delaney Bamford/Emma Dwinell in B could only manage a 9th in the 15 team field. In the end, their experience with frustration with things out of their control will be a valuable lesson.

The Rams hosted the 18 team Salt Pond Invite which was the first home event sailed in our new fleet. Sophie Podlich ’19 with alumni support from Matt Coughlin and Ben McAndrew plus a host of undergrads ran the event beautifully. The Rams entered two teams and lots of sailors participated with the teams finishing 6th and 9th. Finally, the Rams were at an invite at Mass Maritime. They finished 4th in the 6 boat field. Many teams gaining experience. We need to improve.