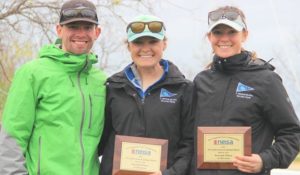 The coed Ram sailors have qualified for the Nationals for the first time since 2011. Rachel Bryer, Hannah Scanlon, and Ellis Havelock were terrific in A division finishing 2nd to Ian Barrows of Yale. Conditions were excellent but very challenging. Saturday was a warm westerly that got windier and progressively windier as the day progressed, but there were some strategically placed lulls at rotation time which kept Hannah and Rachel together all day. The last set of the day was epic with gusts in the upper 20s. They were leading A after Race 7 but a pair of 13s in the last set knocked them back a bit.

Dakota Northrup and Kate Nota started in B and struggled for 2 sets. Brendan Read and Lauren Richards took over for the balance of the day. They had similar struggles for the first two sets but began to get on track in races 9+10 with a 9,4 on a day with few single digit finishes.

At the end of the day the Rams were in 10th and below the cut for the Nationals with a significant point gap ahead.

Sunday was completely different with a cold easterly that was quite stable, but still had some punch. A division was in 420s and Rachel started with Ellis Havelock. They were hot out of the block with a 2,1 set and Brendan and Lauren had a 5,10. The Rams were closing the point gap rapidly but positions hadn’t changed much. The group of teams from 5-10 were all sailing well and gaining on the leading teams. After 14A the 5-10 group were all within a few points.

The breeze dropped big time in 14B and we had a digger. It was time for Dakota and Kate. They answered the bell with a 3 then a 12 surviving a 720.

Hannah was back with Rachel for the last three races. After a 9,5 in races 15,16 the Rams were in 9th and qualifying but not secure. Time was running out and races 17 A and B were started less than 10 minutes apart with the B start at 2:59:40, just 20 seconds before the time limit.

The ladies took care of business in the final A race and lead all around thanks to a big right shift. Dakota and Kate were sabotaged by the same right shift and were far back, but rallied for a 7th moving the Rams past Tufts for 8th. After racing the Rams celebrated with some attitude.

Now we plan for the Nationals at the College of Charleston May 30-June 2.