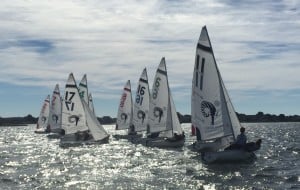 The Moody Trophy at home was the top event in Week 5. Eighteen teams from all over the country came to Saltpond to compete in this A level Interconference event. Saturday began with a brisk northerly. Rachel Bryer / Hannah Scanlon in A traded 1,2 finishes with Harvard in the first A set with the breeze fading fast. Matt Coughlin / Kate Nota managed a 9th in 1B with the breeze evaporating. The fleet then floated about on Saltpond in beautiful October weather for the next few hours. The plug was pulled about 3:00 and the fleet assembled for the tow back to the boathouse. Minutes later, but after A Division had departed from Gardiner Island, a beautiful southerly filled and the tows were turned around to allow 2B to be sailed. The Rams were 12th and found themselves tied for 3rd at the end of the day.

Sunday was picture perfect with a brisk WSW breeze and sunny skies. The Rams were on in both divisions and moved into the lead after a bullet in 4B. Unfortunately, they could not hold the lead, yielding first to Harvard, then to Roger Williams and St. Mary’s in the 7A and B to finish 4th.

It was very disappointing to lose the lead, but the 4th. place finish was the best for the team at the Moody in many years and the best finish in an A level coed event since coach Whyte came onboard in 2013. The team is getting faster and smarter and gaining confidence at every level.

In other action the Rams traveled to Bowdoin for the Barnett Trophy. The Rams finished 5th, on the strength of a strong 4th place B division performance by freshman Brendan Read and junior Sarah Morin. Peter Girard / Jack Hurley were in A. The Barnett, a B level trophy event, is a qualifier for the A level Hoyt at Brown and the 5th was good enough to get the job done.

The Intercollegiate Big Boat Regatta is normally held this weekend in Larchmont, NY, but the event was cancelled because much of the fleet had been pulled the week before in preparation for Hurricane Joaquin.