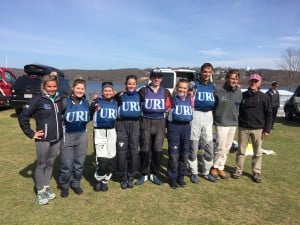 The URI Ram Team Racers celebrated Easter with a solid win at the Staake Trophy held at Conn College. The URI 3 boat team of Rachel Bryer/Hannah Scanlon, Matt Coughlin/Kate Nota, and Caleb Armstrong/Fiona Christie dropped the first race to Tufts, but went undefeated for the remainder of the event to finish with an 11-1 record. The Staake qualified the Rams for the New England Championships to be held April 9-10 at the Coast Guard Academy.

Saturday began in an unstable northeast breeze which caught the Rams off guard in the first race. They followed with a win over Conn College, then the wind died and everyone had an extended lunch break. A beautiful seabreeze filled mid-afternoon and the Rams got into high gear, ripping off 8 consecutive wins to end the day 9/1. Sunday began with perfect calm. Another great seabreeze arrived around 1:00 leaving little time to complete the scheduled 4 round robins. The Rams completed the third round undefeated for an 11/1 record. A fourth round was started with the Rams suffering 2 losses to Tufts and Conn, but it was clear before it started that the 4th round could not get to the required 80% to be counted. Time ran out and the Rams kept their 11-1 record.

The Staake win is the first team race win for the Rams in many years. They began the spring season with an 0/10 performance at the Sharpe at Brown. The Ram second team had a few middle of the pack finishes, then the Rams first team got a last minute opening at the Wood at Harvard where they were second, losing a tie breaker to BC. This was a great performance, but we did not face many of the top teams.

Another last moment opportunity allowed the Ram to compete at the SNETR (Southern New England Team Race) a week later. Conditions were very light and the Rams finished 8th in the 10 boat field. An improvement over the Sharpe, but still far from top shelf. The Staake win is a big step in the right direction. Next week the team racers will be at the Marchiando at MIT and all of the top teams should be there. The Rams will have to get by without Rachel and Hannah who will be at the Dellenbaugh Women’s Interconference at Brown. It will be a big test.