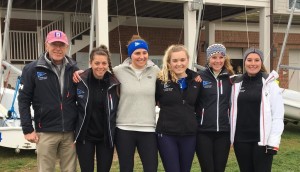 Coach Whyte, Sarah, Marisa, Rachel, Hannah and Courtney – All Smiles After the Win

The Lady Rams continued their impressive string of top finishes with another come from behind win at the St. Mary’s Women’s Interconference over the March 19-20 weekend. Rachel Bryer and Hannah Scanlon continued their string of A Division wins and Sarah Hermus and Marisa Decollibus were awesome in B, finishing 2nd. The regatta was sailed in Z 420s and FJs. Conditions were cloudy and cold, but the wind was excellent with 5-12 knots from the NE both days. Lots of shifts and velocity changes. Great collegiate sailing!

URI and BC emerged from the pack early on Saturday with the Rams taking the lead from BC with a blistering 3rd and 4th set where they posted 4 bullets in A and a 6,1,2,2 in B. BC came right back as the Lady Rams faltered with 6 double digit finishes in the final 2 sets on Saturday. At the end of the day BC had a commanding 33 point lead. The Lady Rams were pissed!

After dreams of another comeback win like the one in Charleston 3 weeks before the Lady Rams were on fire in the first 2 sets on Sunday with 4 top 3 finishes and only one double digit. BC struggled in B with 4 double digits plus one more in A and the Rams were leading by 2 going into the final set, but didn’t know it due to scoring delays.

Thinking they were still trailing BC, Sarah and Marisa stayed on offense and took the bullet in 17 B with BC 5th. Rachel and Hannah sailed a solid race with BC in the rear view mirror to finish 5th and BC 13th. The coaches knew that URI was leading by 13, but could not communicate with the sailors. The Rams didn’t know (and didn’t want to know) the score. BC had better starts in 18 B and A, but the Rams were solid. BC was ahead of URI at the weather mark in both races, but the gap was small. Then it got tense. Sarah and Marisa jibed away from the group and sailed into a hole. BC was 2nd at the gate with URI 11th. With BC ahead in A, the series was tied for a few moments.

Sarah and Marisa had rounded the low traffic left gate and were sailing fast. When the rightie filled, they were raging forward and blew right past BC and came within inches of winning the race. BC was 3rd, but the Ram win was guaranteed. Rachel found a few holes and dropped to 10th but BC could only manage a 3rd. The Lady Rams had won by 8 points, a 41 point gain on BC in just 12 races!

The win assures the Lady Rams another month on top of the national rankings. Going back to the fall the Lady Rams have been on a roll in major events:

The competition is getting better, but so are the Lady Rams. The Dellenbaugh at Brown is the next major event April 2-3.