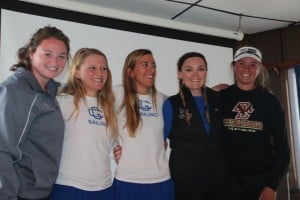 Rachel Bryer with the All NEISA TEAM

The Lady Rams qualified for the ICSA Nationals over the April 25-26 weekend at the Jerry Reed Trophy held at Boston College. The level of competition was higher than ever and there were no easy places anywhere in the fleet. Eight teams qualified and the Rams were 8th, but very few points from 6th. It was close, but we made it and now start even at the National Semifinals in Newport, RI May 25th.

Rachel Bryer and Hannah Scanlon began the event with a 2,1,1,1 in the first two sets and we were rolling. Sarah Hermus and Marisa Decollibus were having less success in B and sat out the third set, yielding to Mackenzie Needham, and Molly Lucyk. As the breeze died a bit Rachel and Hannah lost their touch and added a bunch of points in the next two sets. In B, Mackenzie and Molly struggled in their first set. Our early success had evaporated.

After a break Sarah and Marisa went back in and we tried to hold serve. Rachel and Hannah opened the last set of the day with a 3, but followed with an 11. After ten races in each division, the Rams finished the day in 9th, not good enough.

Sunday served up very different conditions, lighter and steadier, but still very difficult. Rachel/Hannah opened with a 3,3. The Sarah/Marisa got a 9,9. Single digits in B were good and we were 7th. The problem was that the other teams we had to beat were also being more consistent. In the next set we were 4, 7 in A and 9, 2 in B! Sarah / Marisa finally found the starting line and good things immediately started to happen. Going into the final set we were 7th, 1 point ahead of Dartmouth. Rachel had a rough one, 12th, but Sarah / Marisa were getting better every race and grabbed a 5th. Dartmouth had escaped a bit, but we were still strong in 8th

With 1 race remaining and the breeze fading fast, A division got underway and eventually finished with B becalmed. The B race was abandoned and time ran out. We had qualified. While it was a close call, the progress in B was terrific. The Lady Rams know they can be a much stronger team at the Nationals and are excited to meet the challenge.

At the prize giving Rachel was named to the all NEISA first team for the second year. She will be leading the Lady Rams in Newport, but it will take a total team effort and the Lady Rams are determined to be the best TEAM in Newport.