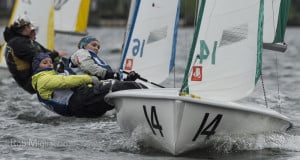 The streak continues! The Lady Rams made it three Interconference wins in a row with a convincing win at the Dellenbaugh sailed at Brown this weekend. Conditions were extreme both days in very different ways. Saturday began with complete calm and lots of rain until mid-afternoon when a nice breeze filled in. The Rams, represented by Rachel Bryer and Hannah Scanlon in A and Sarah Hermus and Marisa Decollibus in B, held a tie breaker lead over Yale at the end of the day.

Sunday began with snow and LOTS OF WIND. The snow passed quickly, but the wind was gusting into the 40s. 1A and 2B Division races were completed during the few periods when the wind velocity was almost sane, but there was no hiding from the monster gusts that passed through every race. Rachel, sailing with Marisa, won their only race and Sarah and Courtney Bombardier added a 2nd and 6th. URI was second in both A and B Divisions which gave them a dominating 15 point win over 2nd place Stanford. Yale was 3rd.

Next week the Lady Rams will have to compete without Rachel and Hannah who will be at the New England Team Racing Championships. Sarah and Marisa will move to A Division and sophomore Kim Morecraft will get an opportunity in B.