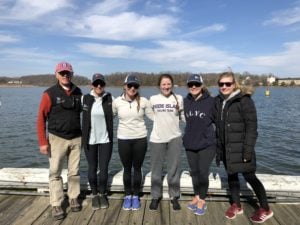 Lady Rams back on the Podium again at Navy!!

After a so-so fall season, the Lady Rams opened up the Spring season with an impressive 3rd at the Navy Women’s Interconference over the March 10-11 weekend. Sarah Hermus and Kate Nota in A were a very strong 3rd behind Coast Guard and Charleston. Delany Bamford and Cece Schneider ended 8th, but only 11 points out of 4th. Taylor Borges was hoping for more wind, but did an awesome job supporting both divisions. It was a great effort by the Lady Rams and positions them nicely for the upcoming big events. Charleston dominated looking very sharp, benefiting from early training in southern climes. Coast Guard, always tough, was second.

Conditions were cold and shifty causing two course re-locations over the two day event which totally scrambled the conditions, forcing all of the competitors to make big adjustments in the flow of the event. It was a great test. The Lady Rams are moving up!