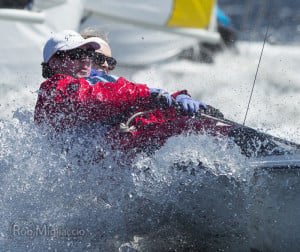 The April 16-17 weekend yielded 4 2nd place divisional performances, but no memorable team results. The premier event of the weekend was the 3 division Thompson Trophy at Coast Guard. Saturday was VERY windy early and the Rams arrived without enough drysuits to put the squad on the water when Coast Guard mandated drysuits. Very embarrassing. 4 DNS’s later B and C divisions were able to start racing when the drysuit requirement was lifted, but the damage was done. The Rams were 16th in the 17 team field. Rachel Bryer, sailing with Johnny Gieseke, jumped out to an early lead in A Division, ending the day in 2nd. Rachel was sailing with Hannah Scanlon on Sunday and they struggled early, dropping back several spots, but finished strong with a 1,2,2 when the seabreeze filled in. They ended with an impressive 2nd in a very tough A Division. Matt Coughlin, with Ian Nannig and Kate Nota, were 11th in B and Caleb Armstrong, with Ellis Havelock and Fiona Christie, were 7th in C, each counting two very damaging DNSs.

In the end, the Rams were 9th, but had B and C Divisions sailed their average scores in the first two races, the Rams would have finished 4th overall. The Ram coed squad needs to finish in the top 8 at the New Englands in two weeks to move on to the Nationals in San Diego. The Rams haven’t made the trip to the coed Nationals in many years. We are confident that we have the right stuff to get there in 2016.

The Rams were busy in 4 more events over the weekend. The top women’s event was the President’s Trophy at BU. Sarah Hermus moved to A Division again and sailed with Courtney Bombardier and Marisa Decollibus. This was the second consecutive week for Sarah in A and she responded with a solid 2nd. Kim Morecraft was in B with Emma Dwinell, Marisa, and Sarah Morin over the two days. Kim is just getting acquainted with top level competition and will need some time to deliver top results, but her performance showed good growth. Watch for her in the fall.

15 teams competed for the 3 Division O’Berg at MIT. The Rams were a respectable 7th, but the highlight was the solid 2nd place performance of freshmen Dakota Northrup  Ryan Geib, and Lauren Oliveira in C Division. Pat Isherwood/Jack Hurley were in A and Brendan Read/Lauren Richards were in B.

The Central series at BC was blown out on Saturday, but there was good racing on Sunday. The Rams were 3rd in the 10 team field with Sam Rush and Ian Nannig finishing 2nd in B. Sam has shown lots of potential and has improved greatly this spring. Matt Gibbs and Fraser Mackechnie were 3rd in A.

Next weekend the Lady Rams will be at the Jerry Reed for the New England Championships. The coed team will be at the Boston Dinghy Club Cup at Harvard, plus four more events.